It took me a full three times to watch this film to the end. Reason? You have to be in the mood for it, and most of the time I simply wasn't. One cold, dreary morning, however I decided to suffer through it. And you know what? I had a great time. This is the kind of horror flick you pop in when you want a horror film that's not scary in any way, just something fun and kind of lame. If you watch it expecting a deeply philosiphical take on the Dracula mythos you'll be sorely dissapointed.

The acting is nothing to rave about, but a few select actors get the job done. With this sort of movie however, acting is the last thing you think about. The special effects are well done with only a few poorly done CGI scenes, a nice change of pace from the CGI craze of the early 2000's. But it's the climax of the film that really topped it off for me.

Slightly lame, but epic none the less the ending makes this film seem like more than just another vampire movie. Some big quiestions about Dracula are answered, and I personally loved the additions it made to the classic story (although I'm fully aware others didn't.)

All in all, it's a fun watch that's perfect for horror movie night with a few friends and family. If nothing watch it for the action scenes.

A creepy treat for young and old.


Silver Bullet is one of the greatest of a dying breed of films. A touching coming of age story with a creepy horror film theme wrapped around it.

Silver Bullet is the tale of Marty Coleslaw, a weelchair bound boy who gets caught up in a string of local murders that all take place on a full moon. When he discovers who the killer is and even worse that he's a werewolf no one will believe him. Now he, his sister and his alchoholic uncle (played pitch perfectly by Gary Busey) must put an end to this unholy reign of terror.

This film is perfect for the "family that loves to scream together". It's light enough for children to enjoy without being too frightened and still offers enough wit, story and gore to keep the adults statisfied.

And with it's action packed ending scene, this film is one of the most delicious horror morsels that the eighties has to offer.


My Bloody Valentine is often bashed in comparison to it's inferior 2009 remake. I'm here to set the record straight.

As is often the case with remakes, the original is leaps and bounds better. This delightful little slasher was born from the early eighties slasher craze started by Halloween and Friday The 13th. Those two films are heralded for starting tons of horror cliches'. But MBV started more than either of them did.

A victim stuffed in a washer. A killer that slowly approaches, knocking out all the lights as he comes. Poetic notes left behind at the crime scene. And tons more that I can't even think of. 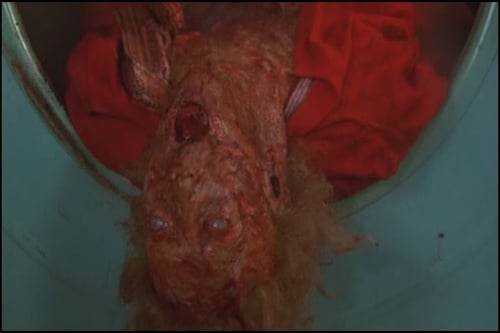 The kills are good, while some are handled a little more subtely than they should've have been, but this flick and it's inventive groundbreaking killer are fantastic if you're into this sort of thing. 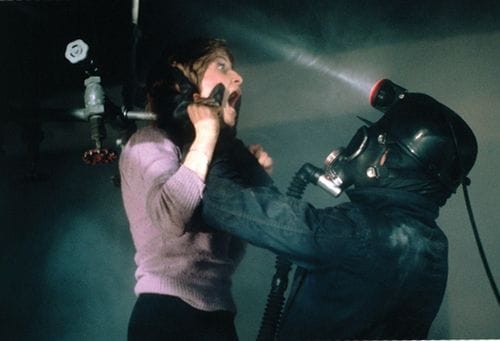 Give it a shot. If you're a child of the eighties you'll be glad you did.

Be Afraid Of Hollywood


Don't Be Afraid Of The Dark is the latest horror film from Guillermo del Toro (Pan's Labyrinth, Mimic, Cronos, Hellboy) and lots of people held high expectations for it.

This film however is an absolute waste of time. Don't be mislead by the frightening trailer, this film is in no way scary. Unless you are easily frightened by bad acting. In that case you're probably already afraid of Katie Holmes.

The creature designs and CGI effects are poorly done and are actually quite funny. And Bailee Madison returns as one of the worst child stars since that ugly child from the Home Alone series. I think his name was Muckmy Clucker.

Anyway, this film is boring, poorly directed, poorly acted and all around bad.

In other words, Hollywood did it again.


I felt inclined to write my first review on this site only to cement the stupidity and vulgarness that is "Deadgirl".

Imagine this. Two teenage boys, one a fairly nice kid and the other a bit rebelious decide to skip school and head to an abandoned lunatic asylum to spend the day. :| A lunatic asylum?

Reason (as stated by character in film): "Because it's fuc*ing hot, man."

Once there they are chased by a ravenous security dog and are forced to go further underground, deeper into the asylum. Eventually they stumble upon a door and inside descover a girl, barely breathing tied down to a metal table.

One boy wants to get help. The other.....he wants to have sex with a half dead woman they just found in the basement of a lunatic asylum.

The rest of the film is basically just the nice kid trying to find someone else who thinks the entire situation is crazy and everyone he brings back the asylum ends up wanting to have sex with the girl (who turns out to be a zombie) as well.

Are you telling me that every single boy in an entire school would want to have sex with a zombie?

This is just one more film making parents more paranoid about their teens than they need to be and making government officials more positive that all teenage boys are sex crazed lunatics in need of psychiatric help. And as a teenage boy, that's a big problem.